Memories of Christmas in the Sierra

Memories of Christmas in the Sierra

In December, 1989, I was working with the Kogi on the film which became “From the Heart of the World: The Elder Brothers’ Warning”.  It was one of those years when my Jewish lunar calendar and their solar calendar coincided.  The solstice, the longest night of the year, fell as always on December 21st, and the next night happened to be the first night of Hanukkah.  So as the sun set after the shortest night, I lit the first of my ritual candles.

I was living with my team above the jungle at about 1200m. in a Kogi town.  We had arrived by helicopter, and were now isolated in a profoundly traditional indigenous community without roads, electricity, radio, telephone and no outside source of food.   Many of the Mamas and a chunk of the population had moved 2000m. higher up the massif to take part in the celebration of the solstice, a ritual event forbidden to us.  I had heard that it involved masks and dances.  Not all the Kogi were inclined to engage with it, and I heard from one man that he had never paid any attention to such things until one year recently, when he had attended out of curiosity.  It had been astonishing, far more impressive than he expected.

I had been unexpectedly gifted a pack of Hanukkah candles as I left England, so I thought I should use them.  I had no candelabra; I used the top of a cocoa tin, and lit the first night’s candle as the sun set.  Kogi gathered around my hut, keeping their distance, intrigued while I recited a Hebrew blessing and sang a snatch of my traditional song.

The next night I moved on to two candles, progressing towards the eight that complete the holiday.  I was unsure why I was doing this, but the Kogi soon formed their own judgement.  I was replicating, in my own way, what was happening further up the mountain.  “He is turning the sun round!”

That close to the equator, the night at midwinter is only eighty minutes shorter than midsummer, but that is enough to make an impression.  It takes longer for the change to become visible after the solstice than it does in London; sunset each day for two weeks after solstice is just one minute later than the day before.  But that was enough to be apparent by the third night.

The next day, December 25th, we were summoned by the “cacique Mama”, the leader of the cultural authorities, Mama Valencia to his farm, where he said he would tell the story of the beginning of the world.  A good day for it.  It was a steep climb, too steep for our mules, so we carried the kit in the steaming heat and arrived rather weary.  We set up, and I invited the great old man to speak of the birth of all things.  He grinned and said “I only said that because I knew it would get you here.  I have something more important to say!”

He spoke not of birth but death.  The death of ancestors, of tradition, of his culture and of the world.  That was why we were there, that was the message to carry.  Afterwards we made the tough journey back, but when I arrived at my hut and stripped off my sweat-sodden boots and clothes the Kogi would not let me rest.  They insisted I accompany them barefoot, wearing just my pants, into the hot jungle.  Up to then I had taken every precaution against insects, snakes and spiders but I was told to fear nothing, I would not be touched.  After a while we reached a broiling river swirling with energy.  I was told to get into the icy water and I would be remade.  That turned out to be true; it was thrilling to be swirled and tossed and exhilarated.  Then I was marched back, arriving without a single bite or scratch.  I lit my four candles, it was Christmas, and the sun was already turning. 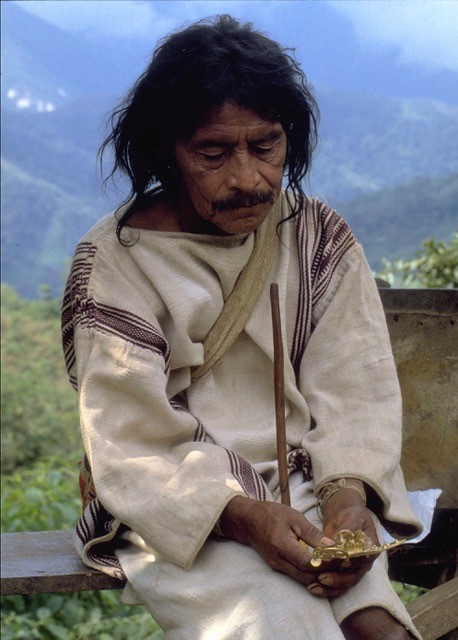