Alan Ereira was invited to attend this two-day conference which was designed to create a sustainable science framework that would shape global policymaking and education.

The central concept is the idea of bringing humanities and science on to the same page, going beyond a multidisciplinary approach to what is being called “transdisciplinary”.  That means bringing together not just academic and scientific knowledge from different disciplines, but also knowledge from traditions that do not belong to traditional disciplines at all, such as indigenous knowledge. So, it seemed timely to explore whether the Kogi might have something to contribute to this forum.

One desired outcome is to explore models of how these partnerships might work so that indigenous people can be involved.

The indigenous perspective sees the world as a living being. This is not a poetic or mystical approach but a practical one which has measurable and sometimes impressive results. 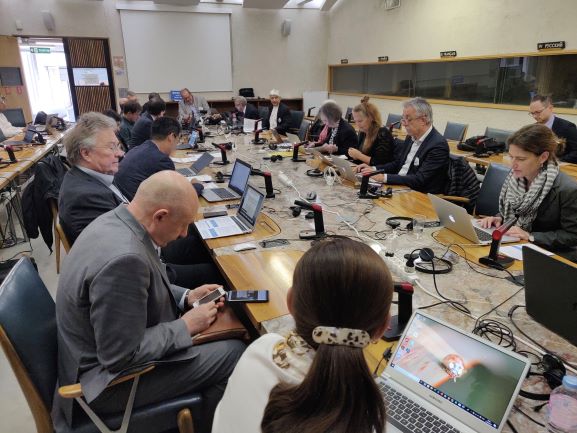 Benno Werlen Executive Director of International Year of Global Understanding pointed out that the idea of sustainability came from an 18th century attempt to maintain forests and mining in Saxony in a sealed space but said that the idea of protection being provided in enclosed spaces was ending and he also thought nationalism had no future, pointing out that traditional ways of living are still successful where culture and science are indivisible.

Nuno Guimaraes da Costa, Chair of Art and Science for the Sustainable Development Goals was concerned about bringing sustainability into management while Sandrin Pollard, Global Hub Director, Future Earth. described the work of that organisation as fostering global research projects, especially with the global south to promote global sustainability.

Lutz Mőller of the German Commission for UNESCO spoke about bringing together digital transformation and sustainability science, the idea of Living Labs conducting science in a very specific context with Biosphere Reserves being used as an example. Alan wondered if the Black Line territory could be slotted in here, though it seems in practice these are very domestic German activities.

Erica M. Robrahn-González, Vice President of the International Union of Prehistoric and Protohistoric Sciences evidenced a case study involving 11 indigenous groups of XINGU indigenous park, Amazonia, Brazil who had won legal protection for the territory and access to it.  Also 2 cemetery sites in different countries were recognised as archaeological reserves with indigenous authority presiding over the remains.  The question was posed as to whether this was a museum activity or useful to the larger world?

Jean-Luc Chotte, Director of the French National Research Institute for Development Strategy talked about sustainability science and geographic research on a continental and oceanic level while Joydeep Gupta, South Asia Director, of the Third Pole (Earth Journalism Network) was a journalist looking for people to connect with.  He highlighted Himalayan rivers which affect 40% of the global population. The Third Pole works in partnership with the Internews Earth Journalism Network.  He flagged up the forthcoming Dibulla meeting to his South American journalist contacts.

Patrick Degeorges, Director, Anthropocene Curriculum, Ecole Normale Superiore de Lyon commented that this was a matter of life and death and quoted as an example of one approach, the Drôme, where the territory is now used as a school and mentioned what the Kogi had found out there last year.

The conference ended with agreement to build a consortium to create a programme of learning that would integrate views on sustainability from unusual partners with a working group on sample sites to be led by John Lthusiasticallyuis.

This topic will be something to discuss with the Kogi when Trust representatives meet with them later this month with Patrick Degeorges also in attendance.

Alan has agreed to serve on the UNESCO steering group and will attend the next BRIDGES meeting in Stockholm in October.