UPDATE: THERE ARE NO GLACIERS LEFT IN THE SIERRA

This morning the Chairman of the Tairona Heritage Trust, Jean-Paul Mertinez, the Kogi-speaking anthropologist Falk Parra-Witte and I met for a long breakfast in London with the Cabildo of the Organisación Gonawindua Tayrona, José Santos Sauna.  He was returning to Colombia after a conference in Oxford with the Amazon Conservation Team (ACT), who are working extensively in the Sierra. Santos was accompanied by Isidoro Hazbun, an associate programme officer of ACT, who comes from Santa Marta and is based in Washington. 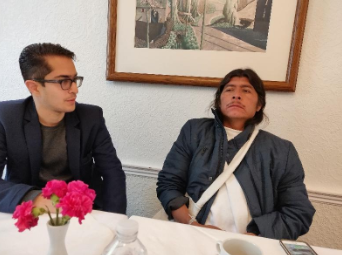 The main points of our meeting were:

To discuss the Trust’s next steps.

To convey our condolences on the passing of Mama Jacinto

1. There has been a serious and very alarming growth of paramilitary activity in the Sierra which affects indigenous people very directly.  There have been at least 150 recent killings of activists and leaders in Colombia. Santos has been targeted, and is now living at a secure location with 24-hour protection.  His surviving children have left the Sierra. Kidnappers seized Kogi to demand information on indigenous assets and protection money. This scary situation is associated with control of the lucrative tourist trade and the current aggressive demands for mining rights.  The Colombian government appears to be turning a blind eye to the scale of what is happening. Overall, this may be seen as the final stage of the Columbian conquest of America.

The situation has been compounded by environmental changes, especially the long drought.  This is understood to be the reason for the extensive fires which have devastated some indigenous communities; they are not believed to have been deliberate arson. The drought broke two weeks ago.

The Trust was thanked warmly for its financial contribution to the reconstruction effort, which was used to pay for a town to be rebuilt and re-equipped.

2. The Black Line is under threat as it is not properly legally protected. Efforts to protect it, such as the decree of the last President, have actually made it more exposed and it is now a nation-wide focus of tensions and clashes of interests.  The Kogi have expelled the nuns from their mission at Pueblo Viejo, telling them that their time in the Sierra had come to an end. They offered them a period of grace of up to a year, but the nuns responded by ripping out everything from their school and medical centre and disappearing in 48 hours, leaving an empty shell. The ACT have been supporting and financing land restoration at Dibulla under the supervision of Mama Shibulata. Operating over 1.3 km of shoreline, from Dibulla to the new intrusive port mega-project at Puerto Brisa, the project has restored wetlands and rivers, and brought back important water-margin life such as turtles and iguanas. Isidoro offered to supply detailed technical reports on what is being done and (especially) how. It is planned to build an indigenous heritage centre there, to be used on an invitation-only basis.

3. It was agreed that the Trust and Tchendukua should move forward as rapidly as possible in developing an "Alliance" between Kogi and Western experts and institutions.  The objective is to produce proposals for land guardianship based on indigenous knowledge that can be applied globally. To this end we are asked to set up a consultation meeting, probably in Dibulla, between Mamas, the Trust and Tchendukua, with input from the ACT, as soon as possible. The purpose of the meeting is to define objectives, a structure and a programme of work, particularly addressing communication, education and an new (for us) approach to practical ecological management. We suggested that the meeting should include the French environmental philosopher Patrick Desgorges, at least one environmental scientist, and perhaps a jurist (since concepts such as "earth law" and the "natural contract" were part of our discussions in France).

We have to produce a budget and funding for this meeting. Santos will also seek the Mamas’ permission for a translation of Shikwakala, their book on Kogi Mamas’ management of the Sierra, into other languages.

4. We were told of the preparations being made for Mama Jacinto’s burial, which will follow a precise set of instructions which he dictated to Santos shortly before his death.  Alan's wife Sarah joined us and made an offering on behalf of the Trust which Santos is carrying back. Santos was instructed by Jacinto that he must now concentrate on communication with Younger Brother (a term which was not used) and is considering stepping down as Cabildo in a year or so.

Photo: Sarah Ereira making offering to Santos on
behalf of the Trust.