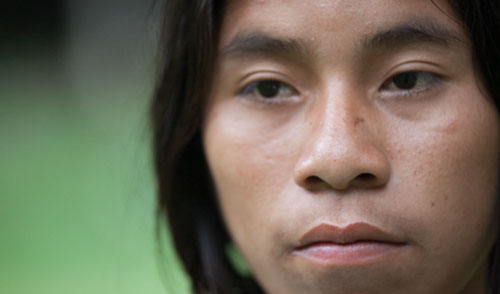 A Short History of the Kogi

The territory of what is now Colombia was originally inhabited by indigenous peoples, including the Muisca, Quimbaya and the Tairona.

The Spanish set foot on Colombian soil for the first time in 1499.  The name "Colombia" is derived from the last name of Christopher Columbus.

The Spanish founded Santa Marta  in 1525 in the traditional homelands of the Tairona people. The native peoples of the province of Santa Marta had a great deal of gold so after the Spanish landed the region attracted an uninterrupted series of Spanish plunderers who did nothing but sail there, attack, murder and rob the native people, stealing their gold and sailing back again. Each expedition overran the area, causing untold harm and a monstrous death toll, perpetrating countless atrocities. Each succeeding plunderer tried to outshine his predecessor, in the arts of terror and murder, and they extended their terror far inland.  According to a report from the Bishop of Santa Marta to His Majesty the King in 1541 ‘the remedy for the ills that beset this territory is for Your Majesty to remove from positions of authority the cruel usurpers presently in control and entrust it to someone who will love and care for it as he would his own offspring and will treat it properly as it deserves and that your Majesty attend to this matter as the highest priority. If nothing is done, I am certain the whole territory will very soon simply disappear from the face of the earth.

The Spanish conquest drove the indigenous people away from the coast to take refuge on the mountain.  They survived by relying on their own traditional way of life under the guidance of their leaders, or Mamas, and shunned the outside world.

The Spanish were eventually driven from the country with a successful rebellion led by Simón Bolívar and independence was declared in 1819.

After a period of relative stability in the early twentieth century violence broke out in the 1960s, when the country suffered from armed conflict between government forces, leftist guerrilla groups and right wing paramilitaries.The conflict escalated in the 1990s, mainly in remote rural areas where the drugs trade flourished. This again increased pressure on the isolated Kogi communities and led to the destruction and contamination of their lands.  A final peace agreement was not signed until 2016 and in 2017 the Kogi Mamas attended a ceremony to honour Colombian President Santos for his leadership in environmental conservation and his committment to the preservation of bio-diversity.  But it remains to be seen whether this is sufficient to hold back rapid development in an area of significant natural resources.

The Kogi continue to claim back and cleanse their lands and warn Younger Brother about the damage we continue to inflict on the planet.

In their own words

It is not possible to repair the damage the Younger brothers have done to sacred sites.  Now we see rivers drying out, avalanches, land slips, drought, unfamiliar weather and all this is being brought about by Younger Brothers.